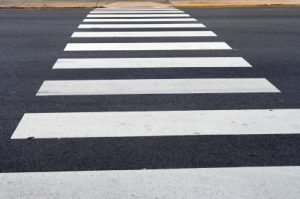 The answer to the question posed in the title of this blog post is “yes”.  I will show you how this is true using a recent case I settled as an example.

My pedestrian-client was injured while j-walking across East Genesee Street in Auburn, right outside our main office. The pedestrian seemingly did everything wrong:  She chose to cross the street a hundred feet or so from an intersection equipped with a traffic light and crosswalk.  Further, she did so at night, dressed in dark clothing, so dark in fact that the witnesses who saw her lying on the pavement after the collision assumed she was a black trash bag that had blown into the road.  The only thing that “tipped off” the witnesses that the black bundle in the road was a person was a shock of blond hair.

Despite these seemingly “bad facts”, we got a substantial settlement for her. How?

To understand how, you first have to clear your mind of some pre-conceived ideas you have about “j-walking”.  This might seem counterintuitive, but a j-walker is not automatically at fault, and the car who strikes the j-walker is not automatically “innocent”.  Most people believe that J-walking is “against the law” so that if you decide to violate the law and are struck by a car “you have only yourself to blame”.  This is simply not so.

Let’s take a look at the relevant statutes to see what the law really is.

First, Vehicle & Traffic Law 1152(a), New York’s “j-walking” statute, provides that “every pedestrian crossing a roadway at any point other than within a marked crosswalk or within an unmarked crosswalk at an intersection shall yield the right-of -way to all vehicles upon the roadway”.  Note that there is no “crime” or even violation of the statute in merely crossing the street outside of a crosswalk.  It is “legal” to do so.  The violation of the statute occurs ONLY when the pedestrian, in doing so, fails to make reasonable efforts to “yield the right of way” to a motor vehicle (see, Chandler v. Keene, 5 A.D.2d 42).

In regard to the driver’s share of the fault, the careful lawyer will examine Vehicle & Traffic Law 1146, which provides that “notwithstanding the provisions of any other law to the contrary, every driver of a vehicle shall exercise due care to avoid colliding with any bicyclist, pedestrian or domestic animal upon any roadway and shall give warning by sounding the horn when necessary”.  Otherwise stated, the drivers is required to see what is there to be seen and to make all reasonable efforts to avoid colliding with pedestrians, and to warn them (by sounding the horn) of the danger.

Here were our arguments:

First, although the driver claimed her lights were on as she struck the pedestrian, no witnesses saw the actual collision itself.  They observed the scene a minute or two later. At that time, the driver’s lights were on, but were they on at the time of the collision?  Driver said “yes”, but our client insisted she looked and saw nothing coming.  We argued that the lights were not on since, if they had been on, our client, the pedestrian, would have seen them as she looked right after crossing the center line.

Second, we argued that, even if the lights were on, and our client was totally at fault for failing to observe and yield to the vehicle, the driver was also at fault for failing to timely see and avoid the pedestrian. All the witnesses stated that the pedestrian’s blond hair was very visible, despite the fact that her clothing was dark.  The speed limit was only 30 miles per hour, the roadway was straight in the area where the collision occurred, so that the driver should have had plenty of time to see the pedestrian’ blond hair and brake or honk for her.

The settlement number reflected quite a bit of comparative negligence on the pedestrian’s part.  There was no denying that she should have walked the 100 feet necessary to gain access to the crosswalk. But, the settlement also reflected the fear the insurance company had of our convincing a jury that the driver was also partially responsible.

Moral of the story:  Don’t assume you have no case just because you got struck when j-walking.  Take your case to a skilled car accident lawyer such as yours truly . . .

Email me at: bersani@michaels-smolak.com      I’d love to hear from you!