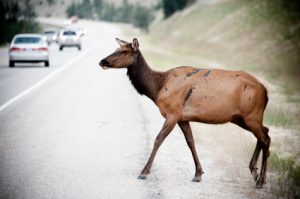 We are right in the middle of “regular-firearm” (as opposed to bow-and-arrow) deer hunting season in New York State. It started October 23 and ends December 12. So let’s talk about car-on-deer collisions, how to avoid them, and the legal consequences if you don’t.

Deer are a lot like you in that, if they are smart, they try to avoid personal injuries.  This means running from bullets.  And spooked deer don’t look both ways before crossing any roads that lie between them and safety.

Just like those deer, you need to watch out for your own safety, but instead of fleeing bullets, you need to avoid the fleeing deer.

Car-on-deer accidents are plentiful this time of year.  Unlike other types of car accidents, if you are injured in a car-on-deer collision, there is no claim you can bring, unless you were a passenger.  (You can’t sue the deer!)  If you are a passenger in a car that hits a deer, you can bring a claim against the driver (and the owner) of the vehicle for negligence. Your car-accident lawyer will argue that the driver (1) should have been driving more slowing; (2) should have been keeping a closer lookout for deer; and (3) failed to react quickly enough when the deer darted into the road.

How do most lawsuits against drivers who hit deer fair?  I have not found any statistics, but most cases are likely lost.  The driver’s lawyer will argue that he or she was faced with an “emergency” situation that quickly unfolded with no warning.  They will claim that there simply was no time to brake or otherwise react to the deer that suddenly leaped into the road.  Most jury members will likely sympathize with the driver because they have either hit deer themselves in the past or have had “close calls” and don’t believe it was there fault.

The passenger’s attorney will have a tough row to hoe. He or she will have to convince a skeptical jury that the driver was going too fast, not paying attention, and/or that the deer was visible for enough time for the driver to break or swerve to miss the deer.

As far as the property damage claim goes, the owner of the vehicle may have collision insurance, but unless the damage is significant, it won’t be worth bringing an insurance claim.  The deductible will reduce the compensation and the incident may cause premiums to increase.

The average cost of repairs for deer-on-car collisions is about $3,000. But the damage to the car of course is not the main problem:  Approximately 140 people a year die from car-on-deer collisions in the United States, to say nothing of the serious injuries that abound.

Yes, this is deer season all over New York State.  Be safe.  Slow down. Visually scan the side of the road as you drive, especially in wooded areas.  Keep your foot hovering over the brake with your car in cruise. Remember that where there is one deer, there are others close by.

Email me at:  bersani@michaels-smolak.com     I’d love to hear from you!